Morgan Brook Farm is located along scenic Route 128 in Westford, Vermont. It was previously the Stark Farm owned by John and Marian Stark. At the time it was a Dairy farm. The Hutchins purchased the property in 2015. They were in awe of the picturesque waterfalls cascading within the Morgan Brook. With its rolling pastures it was the perfect setting to then move their Wagyu Beef cattle to graze the meadows along the Morgan Brook and the Browns River. The farm covers over 400 acres where the herd is pasture-raised and free to roam and feed naturally.

Farming was nothing new to The Hutchins as they were raised on family farms in Vermont. Jeff’s family raised beef cattle as well as, pigs, sheep and chickens. Growing up with a Brook in his backyard he always had interest to someday own property with such a natural site once again; Morgan Brook Farm did just that.

It is always a pleasure to look out your window and see them grazing and the mother cows caring for their newborn calves. Once farming is in your blood it always holds a special place within yourself.

The Hutchins were raising dairy heifers when they began to introduce Hereford and black-balding beef cattle to the mix. A few years later Jeff had the fortunate experience of enjoying his first taste of Wagyu beef at an upscale restaurant. He was amazed at the tenderness and flavor of the meat. After researching more about them he soon learned that not only were they amazing in flavor, but also offers a wide variety of health benefits to the consumer. Jeff soon became interested in raising Wagyu beef with the intent of sharing this delicacy with as many people as he can. In 2011 the first Herd of Wagyu beef cattle arrived from Tennessee to our family farm in Holland, Vermont. Then in 2015 we relocated the farm to its current location in Westford, Vermont. 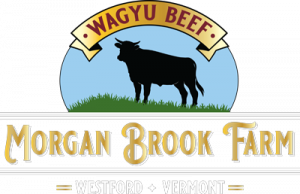